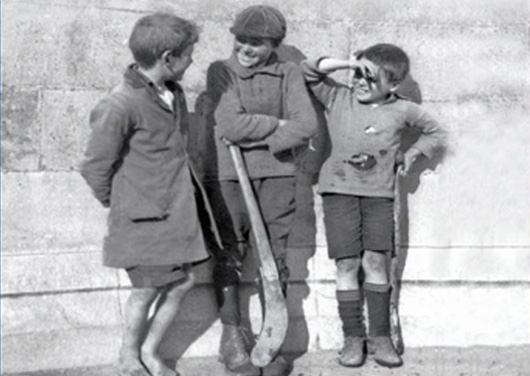 GAA: beloved for generations across all ages

Histories and folklore, stories and legend abound about the ancient Gaelic sports of Ireland. These native games have a rich modern history, peopled by famous names and fabled places, from Ring and Mackey, Purcell and Stockwell to Thurles, Croker and Clones on a mid summers day in the Red Hand Province.

The four seasons speak of the feats and fame, infamy and lows in the vernacular world of Irish sport. These contests have earned its association a rightful place as a dynamic force in today’s Irish society.

Yet within the quilted patchwork of these indigenous games and memories, seldom is noticed a binding thread, which, when unraveled, takes you to the essence of our sporting traditions. Buried within the modern lore of our national games lay exotic histories which span across the world, from Batman’s Hill in Melbourne and the hallowed walls of Jerusalem to the Bocas Juniors of Diego Maradona in Buenos Aires; from the glittering floodlit nigh time glory of nineteenth century Madison Square Gardens experienced by once starving Irish peasants to the Parisian playing fields of the French Sun King.

One word leaps consistently from these obscured gems of Irish history amidst the tales of valour, struggle and joy – indomitable. Though defeat and victory may define the two sides of a sporting coin, these games, to borrow an iconic quote from an iconic Scouse sporting figure of another code, weren’t about life and death – they were much more than that.

through the ages the common experiences of the Irish people and its diaspora. They reflect the evolution of Irish pastimes, from the time football was referred to in the Statute of Galway in the sixteenth century to the dawn of hurling over two millennia before it. They also indicate a communal solidarity and indeed, in some instances, striking similarities with indigenous sports of the Americas, the Old World and the Orient.

The international perspectives of stick games, catch and kick games and handball sports, inform and enrich these sometimes intertwining stories. They set a fitting world view context for the role of Gaelic sports. Football sports such as Tsu Chin in ancient china, the Episkyros and Harpostrom of the Classical world, the Kamari of sixth century Japan right up to the playing of La Soule in Brittany, Cornish hurling, Cnappan in Wales and the founding of the modern day AC Milan soccer club, all graphically illustrate the global rooted nature of the big ball game.

It seems certain that primitive Eskimo and Faroe Islanders caught and kicked about inflated skins long ago in friendly rivalry. So wrote the reliable folklorists and early explorers. The Meso American cultures had strong ball playing cultures. The Mayan kings were referred to as “the ballplayer” as one of their ceremonial titles. In the creation story of the Mayan people, we read of the ball playing heroic twins Xbalanque, (Deer Jaguar) and Hunahpu (Hunter). A 3,600 year old rubber ball is displayed today which originated with the Olmec civilization. Some ancient American cultures had as one of its social cores a ceremonial catch and kick game in which a human skull was used as the core of the rubber ball. Catch and kick games were played all over the world from Tsu chin in fifth century B.C. China to the episkyros of the Greek world and the Harpostrom game of Rome and to the large inflated Roman ball called Follis, we are on even sounder premises.

The Milanese, the bluebloods of European football, is a case in point. They were founded as Associazione Calcio Milano, as opposed to Internazionale Milano – their contemporary rivals Inter Milan, which was founded by English ex pats. Calcio is the Italian for the old version of Italian football which was a catch and kick game with a surprisingly similar tactical formation to the old Irish game of football – it is vividly described in a 1555 Italian treatise. The city fathers of sixteenth century Florence sought to revive the old Roman football game, and il calcio is still played annually to massed crowds in Florence and these annual derby matches would make the infamous Compromise Rules matches of the 1980s look like mild mannered affairs..

Some respected rugby historians hold that William Webb Ellis, the accredited ‘inventor’ of modern rugby, brought back to Rugby public school in England, the Irish football game he had learned from the Irish natives during his childhood spent in an Irish military barracks with his officer father; this ‘caid’ tradition, featured in many primary and published sources; it is also intriguing that three Lions rugby internationals have come from the same rural Kerry parish of Currow – Mick Doyle, Mick Galway and Moss Keane – an area which was traditionally part of the Munster heartlands of the game of caid.

The evolution and growth of indigenous stick games also has a strong Irish influence. Ferocious stick games much akin to hurling were recorded in North Africa, which was once an intrinsic part of the ancient Atlantean routes plied by Irish traders. The close kinship between the Scottish game of shinty and hurling has been explored in both popular and academic features.

It is part of Dublin urban legend that it was their beloved hurling playing Vikings who sparked the phenomenon of early ice hockey. They spread the game to their other settlements, adapting it to their harsh environments. The Icelandic Viking Sagas from 1000 years ago mention such a game, which was called Knattleikr.

The Knattleikr ball game was very popular amongst the Vikings. It was one of the roughest games invented, and often deaths were reported from the games; Viking writer Hord Grimkellson reports at the time of a game between Sands and Botn, that “before dusk, six of the Strand players lay dead, though none on the Botn side”. Apparently Tord Blig was the worst, as he was barred from playing completely due to his “bad temper, even though he was not so strong as to be excluded for that reason”. Apparently the worst berserkers were thrown out of the game even in those days. From west-Iceland it’s reported that at Lekskalvollane (“Ballgame Shelters”) there were annual tournaments that lasted 14 days. Shelters were erected where people lived during the tournaments. The place still bears this name.

Not that Olaf, Leif and co. had exclusive rights to stick games on ice. Oral tradition has it that Whitegate of Clare and their great Tipperary rivals across the mighty Shannon river, Kilbarron, had once played in the heart of winter on ice-locked Lough Derg in the eighteenth century. The origins of another modern stick game played on ice, Broomball, are steeped in the mystery of time, but it is believed to have been influenced by our own Icelandic Vikings and also by the Indians of Eastern Canada, using a ball and stick and tree stumps for goals. Other native sports such as the stick game played by the Aracucano Indians of Chile up to the mid nineteenth century have become extinct, a dusty footnote in the passage of sport and time.

The fate of the Aracucano Indians may also have been the lot of the sports and culture of the Gael in the face of colonisation, assimilation and famines. Yet they were clung dearly to both at home and abroad, throughout the centuries. In parts 2 and 3 we will look ahead at climes and places across the world where in some remote or fabled corner there remain fields and memories which remain forever Irish.