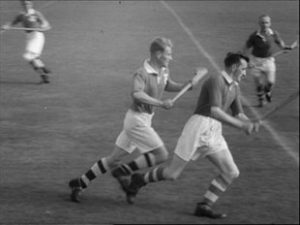 In this the final of our three part look at the clash of the ash and salmon like leaps for midfield aerial supremacy across the world of Gaelic games, we recall some famous and infamous Gaelic sporting events from days of yore, where in some remote or fabled corner there remains fields and memories which remain forever Irish.

Michael Cusack himself presented the Celtic Times Challenge Cup (in whose honor this parish is named) in 1897 to mark the first international hurling/shinty match between Ireland and Scotland at the soccer grounds of Celtic FC in Parkhead, and indeed officiated thereafter at a return match played at Jones’ Road in Dublin that same year.

It marked the culmination of close ties and communication between the Scottish Caledonian Society and Irish cultural and sporting revivalists since the early moves to form the GAA.

John Murdoch, the renowned Scottish land league leader and founder/editor of The Highlander newspaper had, along with fellow Scot and entrepreneur, Morrison Millar, (who helped Cusack establish the Celtic Times newspaper) cultivated sporting links with Irish sports enthusiasts. The founding father of Gaelic games, strongly influenced by the Irish independence leader P.W. Nally (later to suffer horrific conditions while incarcerated in the UK and in whose honour the Nally Stand at Croke Park is named) had an internationalised vision for Gaelic games as had the land leaguer and labour leader Michael Davitt who shared his ideas about Tailteann games with Cusack and the world champion athlete and the first president of the GAA, Maurice Davin. 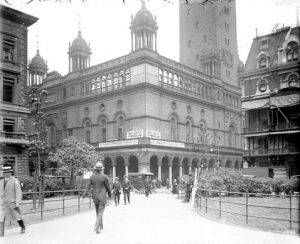 A brilliant piece by Classics teacher and Setanta commentator, Kevin Mallon on the first flood-lit GAA match was published a while back in that unlikely parish of record, the Irish Times.

The exiled Gaelic footballers, who lit up Madison Square Gardens, NYC received glowing tributes even from the mainstream US press. Indeed at that time in the US, Irish football or ‘Gaelic’, which is the euphemism most use for it today, was more popular than the association game or ‘soccer’, and considered by many sports reporters as on a par with their beloved college game or American football. Further research shows later floodlit tournaments were also held to packed houses here such as in 1902. 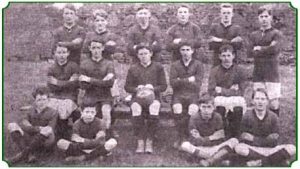 The UK’s first affiliated GAA club was Wallsend, near Newcastle, which was formed in March 1885.

Gaelic games had always been popular with the Tyneside Irish, and it was appropriate that it was to their immigrant community which fell the honour of forming the first branch of the GAA across the Irish Sea. The international ambition of the fledgling GAA was shown when a football match was staged between London Irish and Scotland at Stamford Bridge in 1896.

London Emmets put away the reigning All-Ireland Home Final winners Cork to win a historic title. Cork were to exact revenge against the Londoners the following year. The 1902/03 re imposition of the GAA bans were to cause immense problems for the GAA abroad.

Although London GAA was never again to scale the heights of 1901 they could claim to have an input into the blue ribbon competitions of the GAA each year, as both the All-Ireland football and hurling trophies were named after former London Irish GAA officials.

And they taught the big fellow too… 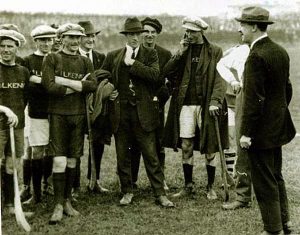 Numerous sources, such as the recently released Bureau of Military history papers document the role of the GAA in fermenting the coming revolutionary struggle. Foremost amongst these up and coming GAA officials domiciled abroad were Michael Collins, who was responsible for swearing in whole London Irish GAA teams into the IRB. Stafford Prison, 1916 was the unlikely scenario for Gaelic football matches, in which Collins himself participated, following a rare home defeat to England the previous month.

It was the era of Puskas and the Hungarian soccer team who decimated England at Wembley; the name stuck to the Clare hurlers who defeated Kilkenny in the Oireachtas final held here. Kieran Sheedy, retired RTE Radio 1 director and author, whose brother Dermot played on this team, relayed how after the first sixty five metre free came in towards the Kilkenny goals and the ash was clashed, the gathered Fleet Street photographers behind the goalmouth, fled in terror as they thought the Paddies had declared war on each other. 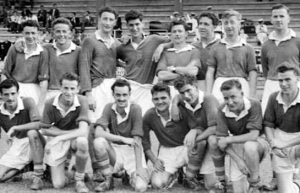 As emigration drove the population of Ireland to under 2.9 million in the 1950s, St. Senan’s of London, an all Clare football team poignantly toured their native county, ‘renewing many old friendships’ in 1957 and played five matches.

The Gaelic Olympiad – The Tailteann Games

There was no sporting apartheid here as even the South African GAA got in on the act in 1932. In the Limerick City Library archives, and the wonderful Ó Ceallaigh GAA collection (available online) there are references to Irish exiles, many of whom had formed part of the Irish Brigade in the Boer war at the turn of the twentieth century, playing hurling matches in the Veldt. After the civil war, many disillusioned patriots began to arrive in South African to begin new lives and in 1928 the Transvaal Hurling Association was formed. Hurleys and sliothars were sent out from the old country to encourage their initiative and it was this body which inspired the 1932 Springbokkers who toured Ireland to compete in the Tailteann Games tournament.

Amongst the spate of hurling movies to come out in the 1950s was Three Kisses, a short, released in 7 October 1955, written and directed by Philly born Justin Herman. It was nominated for an academy. Violence also alluded to in this feature where despite ‘the occasional broken limb and odd bit of concussion, hurling isn’t considered all that rough a sport at all’. Colm Gallagher from a north Cork fictional village is selected by the legendary Cork trainer Jim ‘Tuff’ Barry, a city based tailor to play for Cork against Clare in the 1955 Munster hurling final. Footage from the actual 1955 Cork v Clare Munster semi final is used, in which the Banner men enjoyed a rare triumph. The bold Gallagher is fixated on a local village cailín who partakes in a camogie match which is of much ‘technical interest’ to Gallagher. Brendan Ó hÉithir describes this movie in his acclaimed book, ‘Over the Bar’ and Dr Crossan of NUI Galway has provided both incisive and humorous insight into these revealing histories.

Also of note was the fury unleashed by Rooney star, John Gregson in 1958 when on British TV he described hurling ‘as something between lacrosse and murder’.

Just on the eve of an earlier time of war in 1914, a Cork v Rest of Ireland hurling selection put on entertainment for 63,000 Canadians on Citizen’s Day in Winnipeg. 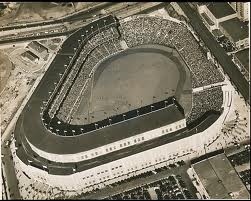 The 1947 All-Ireland final is held for the first time outside of the mother country, as Cavan and Kerry hit the Big Apple, along with the truly great commentator, Micheal O’Hehir.

Set against the backdrop of the Vietnam war, American Gaels took huge interest in the GAA exhibition matches and competitions which were organised at the US military camps in the Carolinas prior to the young Irish being sent to war for Uncle Sam. Around seventy years earlier and in a similar environment, Mr Naismith had invented basketball to keep troops entertained at their New England base – thus began the phenomenon of the hoops.

The Hurling Boys of Buenos Aires 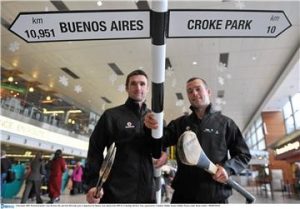 Until WW1 and the short supply of ash, hurling was immensely popular in Argentina, a country where even Gaeltachts existed in the early 20th century. The Hurling club in Buenos Aires remains today a favoured haunt of the Irish. This parish contended previously in an earlier work, Ireland’s Banner County (and yes, we will shamelessly plug that some copies from a second print are available directly from the Celtic Times or from Gerry Griffin’s much loved Scéal Eile in Market St., Ennis, don’t be foolish enough to pay the €1000 or so quoted online for a 1st edition signed copy previously advertised by some boyo) that there was a larger Clare Gaeltacht in 1930s Argentina than there was in the Banner itself, even accounting for the still magnificently scenic and poignant Carrigaholt and Gleninagh districts.

Of course, there are close ties with our Argentinean brethren, which is probably why our rugby internationals with them have taken on something of a civil war nature with them. It was the Christian Brothers who brought our caid version of the rugby out to the South Americans.

Don’t forget either, it was a Clare man who stuck the winning goal in the world cup soccer final versus West Germany in 1986, Jose Luis Brown – the old townies offspring from Ennis were always good for a goal or two. Although I am not sure if Brown ever got a chance to wear the Tipperary inspired colours of Diego Maradona’s Boca Juniors, which an Irish missionary priest introduced to Buenos Aires

Rules Made to be Broken…

A cursory overview of Gaelic sports abroad would be incomplete without mention of the good, the bad, and Triple X rated ugly as the catch and kick cousins from Ireland and Oz catch up with each other regularly nowadays in the International Rules Series, the next joust is a few weeks away. And we remind all Aussies how we allowed them borrow our four goalposts field alignment of earlier days.

It is ironic that the lesser played of the GAA sports, handball, has had the greatest international platform and can afford to the very best a professional livelihood. And as for the Citizen Cusack’s beloved weight throwing, the most traditional of Irish sports, sure didn’t we provide up to Dr Pat O’Callaghan and the 1932 Olympics almost forty unbroken years of world dominance. Perhaps the modern Olympics father, Baron de Coubertin, picked up his sporting inspiration for Olympism from his lengthy Irish stay in the 1890s in pursuit of an elusive cailín.

PS: Congratulations to Clondegad GAA for attaining Clare senior status recently when annexing the Talty Cup; it is some parish to hold two vibrant senior teams, Lissycasey being the other – together they’d rule Munster football although the steadfast sons of Kilmurry Ibrickane may have a say yet on that for some time to come!!