‘Gentlemen, you have a Country’ – Thomas Davis, a Real Irish President 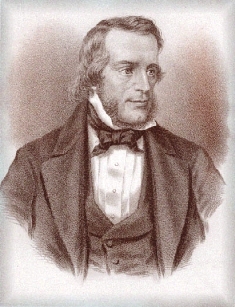 “Gentlemen, you have a country” – these are not words uttered by the Celtic Times but by an Irishman, Thomas Davis.

An Irishman and a master. Born almost 200 years ago in that historic crossroads of Munster, the innovative heritage town of Mallow, on 24 October 1814. Davis and his works remain as relevant as ever with a presidential election looming large this Thursday.

Two years from now his native homeland, led by the citizens of Mallow will celebrate his bicentenary and what his activities and writings did for Ireland, not just in his short lifetime but the spark they lit in future patriotic generations. Leading lights from the Celtic pantheon of patriots, from Arthur Griffith and Pádraig Pearse to John O’Leary and Michael Cusack all cited Davis as their inspiration.

Economists, poets, Fenians and cultural revivalists revered him. Yet this son of a British military surgeon and an Irish Protestant mother, died at the too young age of 31 of scarlet fever.

Considered once as a troublesome student, Davis learned enough at Trinity College Dublin to become imbued with the teachings of previous graduates from this university, Wolfe Tone and Robert Emmett and came to a life defining conclusion that only a free and independent Ireland could meet the needs of the Irish people.

According to this revolutionary schooling, physical independence and the severing of British rule in Ireland through military action could not be attained and was indeed futile, without having a cultural, spiritual, sporting and economic foundation for liberty.

Thomas Davis strides the stage of mid nineteenth century Irish history as a giant during his public life. Although happy to follow and admire the champion of the constitutional populist movement, Daniel O’Connell and the repeal movement, he was forthright in his views on their shortcomings which created tension with O’Connell and led to an embittered fall out. This eventually led him to follow a divergent militant path to the Young Ireland movement. Yet what remains Davis’ outstanding contribution to Ireland was his vision for cultural independence and the ability to communicate this successfully through his writings in The Citizen, and the famed publication he later co founded with Charles Gavan Duffy and John Blake Dillon, The Nation.

Yet one wonders in this age of a near hegemonic Dublin based print media, how Davis would communicate such ideas today. It is something to behold now on a Sunday morning that we have Rupert Murdoch’s Sunday Times and Tony O’Reilly’s Sunday Independent as near sole proprietors for the Irish public mass, with some British owned red tops, an Irish version red top or two, and the Sunday Business Post. Sin a bhfuil. And how an angle can be taken by such interested parties once interested.

Look for example at how the state TV version of the Message got its point across to the people, when the ample Mother Ireland herself, Miriam O’Callaghan interviewed six Irish presidential candidates and avariciously interrogated the seventh, Martin McGuinness. No matter what way one votes out of seven ways, it is not on for a state paid employee or her scriptmaster(s) to obnoxiously attempt to humiliate a presidential candidate during a live presidential interview on account of being a a republican past and present. To single out McGuinness and ask his fellow presidential candidates whether they would have a difficulty with McGuinness as president, while not asking the same of the others was quite frankly, contemptible.

Methinks Davis would have been a social media pioneer somehow. He may even postulate that today’s candidates and the crazy amount of undue attention it gets for such an impotent position is just a state sponsored panacea to remove our national thought away from the pain of such as German Finance Minister only a few short weeks ago calling for the Irish tricolour representing the united traditions, religions and culture of Davis’ Ireland to be flown at half mast. He might call it for what it is, a personality driven, Irish ‘X Factor’ meets presidential cage fighting to numb the masses. He may call out that there are many, many thousands of Irish who see a failed state and demand a new republic.

That there are many, many thousands of Irish who no longer live, through no volition of their own, in the state that Gay Mitchell has wholeheartedly declared such public love for, which subsequently rejects their right to vote in this presidential candidate but may issue their children to come with certificates of Irishness if they hang tight abroad. That President Mary Robinson lighting candles in the presidential window for the Irish diaspora waxes little today with those interested emigrants who are told by leading, well paid state RTE employees that because they pay no taxes which helps pay their wages, they have no rights to vote. Such is Rome.

This is not intended as a slight on the presidential candidates who are on the whole, good people in their own right, and those who previously flew the kite. They are interested and committed people to varying degrees. Would any of the standing seven to seek to facilitate such voting rights while in office? Would any of the seven use the mechanisms of this economically failed state to refer future NAMA type legislation to the people of the Nation and not just sign off on spooked government finance bills which turned private debt into sovereign debt at the stroke of a pen and placed a millstone on unborn generations to come, like the outgoing president did? Mary McAleese, an otherwise dignified figurehead again remains along with her husband Martin, intrinsically decent people, too decent perhaps to fend off the hand which once helped them into high office?

Sean Gallagher, who now looks a shoe-in comes from the same political gene pool. I like a lot of what I have seen from him, he is an inspirational speaker, and a man who has both failed and succeeded in business. I remember how he spoke at the Entrepreneur’s Show at the RDS last year and said if your business fails so be it, you do not fail, your loved ones will still love you, not your business. If your job becomes redundant, you are not redundant. Become a doer. Strong stuff, but would he still say no to future NAMA bills or toe the line with cap in hand. I think I won’t be investing in this outcome. Would any of them turn to the people?

I can only think one amongst them would. These questions have not been generally asked; just all decentskin, soapy stuff, and nasty, personal guff which has little or no public relevance. And that’s exactly what many reckon we will get, all airs of decency and dignified irrelevance. Davis sought to foster a nationality of the spirit of Ireland. That can-do, self governing, independent thought and action is exactly what we need in the wake of the economic collapse, not just confined to the citizens of the twenty six county state but extended to and embracing the cherished diaspora who are going to be targeted as part of a multimillion euro tourism campaign for the 2013 Gathering. They need, we all need a president to not just symbolise this, but to become this. We have a country still.